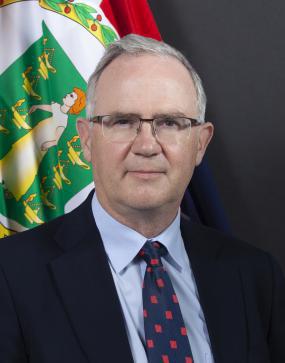 His Excellency the Governor, Mr. John Rankin, CMG delivered his first Speech from the Throne on behalf of Her Majesty Queen Elizabeth II on January 18.

The Speech outlined the Legislative Agenda of the elected Government of the Virgin Islands during the First Sitting of the Fourth Session of the Fourth House of Assembly, which will focus on introducing and amending different pieces of legislation under the theme: “Positioning the Virgin Islands through Legislation to continue improving the standard of living of our people”.

The theme is aligned with the direction and goals of the elected Government’s 2022 Budget under the theme: “Strategically Positioning New Industries with Sustainability and Innovation: Continuing to improve the standard of living with focus on Education, Small Business, Healthcare and Technology”, which is aligned with the overall vision to transform the Territory into a leading economy through entrepreneurship, innovation and local and foreign investment.

Legislation will be segmented into the following areas: Good governance, transparency, and accountability; Strengthening food security; Strengthening the education, sports and cultural sectors; Preservation of the natural environment; Health and safety improvement; Health and Safety in the context of buildings, roads and water; Economic, medium, small and micro businesses, tourism and business development; and Economic Legislative measures.

Governor Rankin said he was keenly aware that the past year has been a demanding one for the Virgin Islands in the face of the COVID-19 pandemic and pledged his continued commitment to working with the elected Government in support of the people during this time. The Governor noted the Government’s commitment to good governance, transparency and accountability and highlighted several pieces of legislation that will bolster this obligation to security, the administration of justice and the way in which government’s business is conducted.