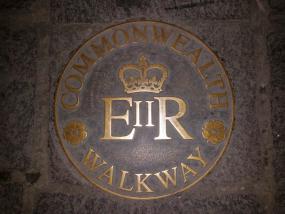 Plans are being made to establish a Commonwealth Walkway here in Road Town as an enhancement to the city’s attraction.

Minister for Communications and Works, Honourable Mark Vanterpool said that the Government is continuing to improve the various historical sites and tours in the city of Road Town for visitors and residents alike. The Commonwealth Walkway is closely knit with this goal in mind.

City Manager, Mrs. Janice Braithwaite-Edwards said that the Commonwealth Walkway is a part of the Healthy Spaces and Places initiative led by the Health and Wellness Advisory Council. The Office of the City Manager, the Town and Country Planning Department, the Ministry of Education and Culture and the BVI Commonwealth Games Association will all be involved in the execution of the proposed walkway.

She further explained that the walkway will enhance the city’s aesthetic appeal for visitors and encourage persons to be active.

“The prospective Commonwealth Walkway in Road Town will follow a route situated near historical sites in the city for which a bronze marker with the Queen’s Cypher, EIIR, will be placed to indicate each historical site.

Additionally, a free app will be established to interpret and guide persons along the route” said Mrs. Braithwaite-Edwards.

Chief Executive Officer for Outdoor Trust UK, Mr. Jim Walker will be in the Territory this week, accompanied by other UK representatives, to discuss the execution of the Commonwealth Walkway.

During next week, Mr. Walker and the team will explore the prospective route, visit schools, and meet with government officials.

A Commonwealth Walkway has four main goals: To connect people of the Virgin Islands - especially youth; to inspire people to learn more about the diversity and richness of the Commonwealth; to encourage people to walk more to benefit their health; and to celebrate Her Majesty the Queen as Head of the Commonwealth, in a subtle way.

The Outdoor Trust succeeds the Jubilee Walkway Trust which aims to create 100 walkways in all 71 Commonwealth Nations and Territories. The British Virgin Islands will be the first in the Caribbean in establishing a Commonwealth Walkway.

There are currently 17 walkways across the Commonwealth Nations. It is expected that the route will be used for the Queen’s Baton Relay in 2017.

The Office of the City Manager is committed to improving the city of Road Town’s infrastructure, aesthetics and operations.