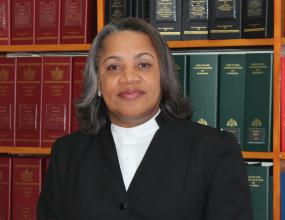 Virgin Islander, the Honourable Dame Janice Mesadis Pereira, DBE will be the third Virgin Islander to receive an honorary degree from the University of the West Indies.

Premier and Minister of Finance, Dr. the Honourable D. Orlando Smith, OBE said the Honourable Dame Janice Pereira has played an integral role in facilitating the advancement of justice in the Virgin Islands.

He said, “Honourable Pereira continues to make her mark in Virgin Island history having now been the third Virgin Islander to be conferred an honorary degree from the University of the West Indies and the first female. She has and continues to represent this Territory and the region globally and has indeed made her mark on the world. I extend heartfelt congratulations to Dame Janice on this well-deserved honour and for her contributions to this Territory. ”

The Honourable Dame Pereira is amongst seventeen influencers who have made outstanding contributions regionally and internationally within their respective fields to be awarded honorary degrees by The University of the West Indies (UWI) in 2018.

The Honourable Dame Pereira will receive an Honorary Doctor of Laws on October 13 at the Open Campus in Saint Lucia. The ceremony will be streamed live allowing friends, family and well-wishers to view the proceedings.

As is tradition, the honorary graduands represent a cross-section of eminent people in the arts, sciences and other fields. Their degrees which have been approved by the University Council, will be conferred at The UWI’s 2018 graduation ceremonies and presented by Chancellor Robert Bermudez.

The Honourable Dame Janice M. Pereira obtained her Bachelor of Laws Degree (honours) from the University of the West Indies in 1979 and her Certificate of Legal Education in 1981 from the Norman Manley Law School. She was called to the Bar in the Territory of the British Virgin Islands in 1981 and St. Christopher & Nevis in 2000.

Between 1985 through 1986, she practiced as an Associate with Harney Westwood & Riegels. Following from 1989 to 1990 she practiced with the firm Mc. W. Todman & Co and then went on to make partner in the firm Farara George-Creque & Kerins between 1990 through 2003. In September 2003, she was appointed Judge of the Eastern Caribbean Supreme Court and was assigned to serve the Territories of Anguilla and Montserrat. In January 2009, Dame Pereira was elevated to the position of Justice of Appeal.

In August 2012, she was appointed to act as Chief Justice of the Eastern Caribbean Supreme Court and appointed Chief Justice on September 28, 2012. In May 2013, Justice Pereira was awarded Dame Commander of the Order of the British Empire by Her Majesty Queen Elizabeth II.

Dame Janice serves as Chairman of the Judicial & Legal Services Commission [JLSC], JLSC BVI and JLSC, Anguilla. She is also a Member of the Regional Judicial & Legal Services Commission of the CCJ in Trinidad. Dame Janice has served as Chairman and Member on numerous Boards and Committees in Anguilla, Montserrat and BVI. She has received several awards during her career for dedicated service and contributions to the administration of Justice.