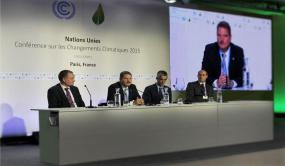 “The fact that the overseas countries and territories are located in such diverse climates means that there are different opportunities with different types of renewables, but everywhere we see that a significant potential exists and there is a strong willingness to deploy more renewables; which sends a strong signal also to the conference of the parties here, that the islands will not just be the victims of climate change but they are actively contributing to finding solutions. Renewables are not just a solution for the islands, but the islands are now positioning themselves as centres of excellence for innovation and for finding solutions that can be applied more widely.”
Dolf Gielen, Director of the IRENA Innovation and Technology

At the margins of the UNFCCC COP21, where world leaders are meeting to discuss means to stabilize greenhouse gas concentrations in the atmosphere at a level that would prevent dangerous anthropogenic interference with the climate system, the Association of Overseas Countries and Territories of the European Union (OCTA) made an important announcement. OCTA has recently joined the SIDS Lighthouse Initiative and through this new partnership, OCTA and IRENA join forces to accelerate the development and deployment of renewable energy in islands.

The announcement was made following a side event in which OCT representatives presented their innovative approaches to climate change adaptation and mitigation, from the Poles to the Tropics, in a session moderated by Dolf Gielen, director of Innovation and Technology at the International Renewable Energy Agency (IRENA).

Honourable Mike Eman, Prime Minister of Aruba and OCTA Vice Chair spoke about renewable energy as a driver for a sustainable economy, giving some examples of how his government is mobilizing to achieve the Aruban target of 100% electricity production from renewable energy by 2020. Having had a six-fold increase in their gross domestic product between 1986 and 2013, Prime Minister Eman stressed that “Economic growth must also be translated into well-being for the Aruban citizens.

Because as Robert F. Kennedy addressed in 1968, the gross national product does not measure the health of our children, the quality of their education or the joy of their play. Aruba is therefore now investing and working on not just having 5 star hotels, but also having 5 star schools, 5 star elderly homes and 5 star neighbourhoods. And sustainable energy is the main driver in the realization of this renewed Aruba”.

Greenland’s Minister of Finance, Mineral Resources & Foreign Affairs, Vittus Qujaukitsoq, reminded participants of the important role to be played by local (indigenous) communities, and how climate change is not only affecting their wellbeing, but will potentially affect their culture, as their surrounding environment is changed. He stressed that “all Islands, from the poles to the tropics, are facing extreme changes, but we are small voices individually. We need a strong united voice to give input to the international negotiations".

Dr. Bran Quinquis, Technical Advisor to the Cabinet of Health and Research with the government of French Polynesia, shared how his government is addressing climate change, and presented a world premiere: An educational Marine Area, a Marine Protected Area managed by children, reminding the audience that the future is not ours, it is of the children, while calling for strong cooperation: “Together, let us take up the Paris challenge for Islands and oceans”.

Recognizing the important role that energy plays for development, the Overseas Countries and Territories (OCTs) of the European Union have engaged in using their natural resources in a path towards their sustainability. In doing so, OCTs aim to moving from having one of the highest costs of electricity and petroleum in the world, to increase the share of renewable energy.

On June 2015, Energy Ministers from the OCTs gathered in Brussels to adopt a Sustainable Energy Roadmap. This meeting demonstrated a political willingness for OCTs to serve as regional hubs and centres of excellence, and the added value that OCTs have in the field of Sustainable Energy. This first Energy Summit was a significant step, as it was the first ever OCTA ministerial meeting on a specific sector, demonstrating the OCTs focus on this important issue and paving the way for theme-specific cooperation in the future.

Following the adoption of the Sustainable Energy Roadmap, OCTA’s accession to the SIDS Lighthouse Initiative adds to the assistance available to OCTs, to support achieving the targets set in their common Roadmap.