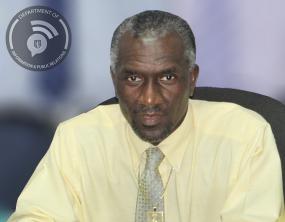 Cabinet has approved the appointment of Mr. Kelvin E. Hodge as the Chairman of the BVI Ports Authority Board for a period of three years effective May 13.

Mr. Hodge served the Public Service for 37 years working with the Department of Information Technology and the Treasury Department, Government of the Virgin Islands.

He is also a business entrepreneur and is owner and manager of Kelly’s Hardware Store, West End, Tortola.

According to the British Virgin Islands Ports Authority Act, 1990 Section (4), “the BVI Ports Authority Board operates and maintains all port and harbour services and facilities in the harbours; takes action as the authority considers necessary in relation to the exercise of any of its functions.

It provides regular services for stevedoring, shipping and transshipping, landing and warehousing, loading and unloading of any cargo at any port or harbour, directly or through any authorised agent.

The Authority collects dues and charges; develops and manages all lands including lands on or under the sea-bed leased to or vested in the Authority and performs such acts as the minister determines and reports to the minister at such times as he requires respecting the matters to which the Act relates and carries out the provisions of the Act.

The BVI Ports Authority was established in 1990 as a corporate entity and began its operations in 1991. Its mission is to provide and maintain the required harbour and marine infrastructure and facilitate the safe, efficient and effective use of ports throughout the Territory.