Knowing On Which Side The BVI’s Bread Is Buttered 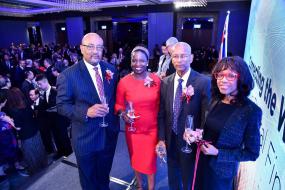 Knowing On Which Side the BVI’s Bread is Buttered

A Case for Economic Diplomacy

When the BVI Government decided in 2013 to open it’s office in Asia, it estimated that somewhere in the range of 40 to 60 percent of the BVI’s financial services business originated from China and rest of the Asia Pacific region.

Last year with the publishing of the London-based Capital Economics report, Creating Value: the BVI’s Global Contribution, we were able to concretize that figure to 41 percent specifically. Forty-one percent of the BVI’s financial services business or at least 25 cents out of every dollar of the 60+ percent in revenues going into the BVI’s Treasury to support schools, hospitals, roads, infrastructural development and Government salaries among other things come from China and the rest of Asia.

According to the Capital Economics report, China alone (including Hong Kong and Macau) accounts for 35 percent of the global business coming to the BVI. As a services based economy, that makes China the BVI’s most important trading partner and, to be absolutely clear, China is responsible for the most butter on our bread and roofs over our heads.

It makes sense to align economically with the country offering more opportunities to invigorate, diversify and grow the BVI’s economy. Investing resources in strengthening the BVI/China partnership is not only strategic, but also basic common sense. The benefits accrue to all - they trickle up, down and across the BVI economy.

With few exceptions, countries across the globe have been pivoting to China to get a slice of its growing economic pie. This is with good reason. China is the world’s second largest economy (and according to the IMF, the largest when corrected for purchasing power parity) and has the largest share, and growing, of the globe’s wealthy consumers among its 1.42 billion people.

China in turn has been going global for the last 30 years and has been the driving force behind many large infrastructural projects across Asia, Africa, Europe and the Americas, including in some of our own Caribbean countries. Even the City of London has the China stamp on it.

China’s innovation, sophistication, technological advancement and astuteness of its business leaders is unparalleled by any country in the world. Not to mention that its top tiered cities, high speed railways and airports make its Western counterparts look like mere second and third runner-ups.

According to one of the lead economists, China’s Belt and Road Initiative (BRI), which is now open to any country to participate, is and will continue to be the most important and impactful macro-economic undertaking in the world, for at least the next ten years. Estimates are that funding for the BRI promises to be in the trillions of US dollars and would require mobilising the world’s capital markets.

The BRI provides enormous opportunities to participate for a wide range of businesses, from small and medium-sized enterprises to multinational corporations. Investors everywhere are devising ways to incorporate the strategy into their development plans.

The BRI represents a great opportunity for the BVI’s new micro business companies and for its traditional business companies, which for three decades have proven successful for Chinese investors and corporations doing cross-border trade. According to UNCTAD World Investment Reports, the BVI was the second largest investor in China from 2006 to 2012 for inward foreign direct investment (FDI) and the fifth largest for outward FDI in 2012. Recent statistics from China indicate that the BVI still remains in the top ten for both inward and outward China FDI flows. In simple terms, this means that when Chinese, state and private enterprises, want to do business outside of China, they use BVI companies. And when they want to partner with investors and bring business into China, they also use BVI companies. Other investors going into China also use BVI companies.

While the BVI is in pole position, we cannot afford to rest on our laurels. With the increasing fierce competition and threats to BVI business, it was critical for the Premier to spend the last two weeks building confidence in the BVI brand in our largest market as he traveled to five cities, pounding the pavement from early in the morning to late at night, making the BVI’s case to government officials, entrepreneurs and investors in meetings, lunches, dinners and giving 12 speeches and remarks to collectively over 1000 business leaders. The theme of the mission in China and Asia was clear, we’ve been your partner for the last 30 years and we will continue to be your international partner as we move into the digital era.

Some are trying to create jurisdictional arbitrage because of the UK’s recent moves, but the BVI will continue to put emphasis on its most important market while it still explores other emerging markets.

It’s not just the financial services business, but countries are also vying for the Chinese tourism market. China is now the largest tourism source market in the world and accounts for 21 percent of the world’s international tourism spending. According to the World Tourism Organisation, in 2012, China became the world's top spender in international tourism and has remained so ever since. In 2016 Chinese made 135 million trips overseas (including for cruises) and spent US $261 billion on their holidays abroad. The BVI is trying to tap into this front too and has applied for Approved Destination Status to be able to market its tourism product in China. To further demonstrate its commitment, the BVI Government recently approved visa-free access for Chinese travelers to the BVI for tourism and business purposes.

The United Kingdom itself has already ramped up its efforts and China presence, driving its Great Innovation campaign to secure its share of China’s great economic pie in investment, tourism and financial services. At last year’s Belt and Road Forum for International Cooperation, London and Hong Kong locked horns over which city should be the Belt and Road’s financial hub. Whether London or Hong Kong, BVI’s business companies are positioned to be the vehicles of choice for the BRI cross border transactions. And like the UK, the BVI will continue to shore up its efforts in China.

Why did the Premier prioritize going to China and Asia over going to London? The answer is simple: He clearly knows on which side the BVI’s bread is buttered.

Elise Donovan is the director of BVI House Asia and the Asia Pacific Regional Representative. She has been based in Asia for the last four and a half years.