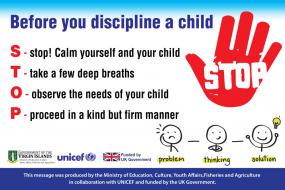 The Ministry of Education, Culture, Youth Affairs, Fisheries and Agriculture reported that its campaign on positive behavioural management has reached more than 20,000 residents through digital advertisements and billboards.

The national campaign held in conjunction with the United Nations International Children's Emergency Fund (UNICEF) in the BVI and financed by United Kingdom (UK) funding saw 369 teachers, principals and education officers receiving training in behavioural management. The campaign also involved providing technical support and advice to the Ministry to draft a National Behaviour Policy and make updates to the Student Code of Conduct.

His Excellency the Governor, Mr. Augustus J. U. Jaspert congratulated the Ministry of Education and UNICEF for delivering an impactful campaign.

The Governor said, “It has supported our teachers during a difficult year and brought long-term improvements to the BVI’s education system. Thank you to the UK Government for their funding and to all the hard working officers at the Ministry and UNICEF who made it a great success.”

Deputy Premier and Minister for Education, Culture, Youth Affairs, Fisheries and Agriculture, Dr. the Honourable Natalio Wheatley also commended his ministry, UNICEF and the Government of the United Kindom for a successful campaign.

Honourable Wheatley said, “The campaign conducted by the Ministry of Education and UNICEF, with the support of the UK, has helped to further the Ministry’s goal of enhancing resiliency through educational reform and has raised the standard of the quality of instruction being provided by our teachers. Thanks to the hard work of UNICEF and the ministry, and the generous support of the UK, our commitment to raising and meeting standards in education has been reinforced.”

The grant supported by UK funding of $162,000 was split between four overseas territories to facilitate individual national campaigns over the duration of this year.

The Government of the Virgin Islands through the Ministry for Education, Culture, Youth Affairs, Fisheries and Agriculture remains committed to the professional development and training of the Territory’s teachers and education leaders based on internationally accepted models of best practice.