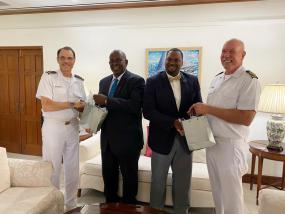 Captain of the International Maritime Organisation-recognised training platform vessel the MV Freewinds paid a courtesy call on His Excellency the Acting Governor David Archer, Jr. and then-Acting Premier, and Minister for Health and Social Development Honourable Carvin Malone on Tuesday.

The Acting Governor expressed his gratitude to the Freewinds representatives, and encouraged them to continue their exemplary service.

Mr. Archer said, “I am very impressed with what you are doing; that you are part of the community, not just making a call and bringing in passengers to enjoy our shores, but you are helping and serving while you are here.”

The Acting Premier echoed those sentiments, and added that as Minister for Health, he was particularly pleased to hear that traveler health considerations are part of the ship exercise offerings.

Mr. Malone said, “Globally, we are concerned about diseases like the latest Coronavirus. I think we have a number of protocols in place that are appropriate, but it’s encouraging to know that these measures are being followed and tested by the vessels.”

Mr. Napier has led the vessel for approximately 30 years, and explained that while they have responsibility to respond to port and ship emergencies, few Caribbean emergency response or port security agencies have had the opportunity to work with cruise ships.

“We want to share knowledge,” Mr. Napier said, adding, “It originally developed from a necessity that we saw among the destinations, which we observed because we are part of the communities that we visit.”