Transparency And Accountability At Forefront For Government 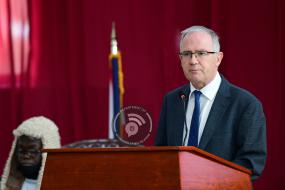 The Government of the Virgin Islands has placed transparency and accountability legislation at the forefront of its agenda for the Fourth Session of the Fourth House of Assembly.

This was highlighted during the Speech from the Throne delivered by His Excellency the Governor, Mr. John Rankin, CMG on January 18, which underscored the Government’s commitment to improving the standard of living for the people of the Virgin Islands.

Governor Rankin said the Freedom of Information Act will be introduced to govern the public’s access to information held by public authorities. Meanwhile, the Proceeds of Criminal Conduct (Amendment) Act will seek to amend the Act of 1997 and make provisions for unexplained wealth orders.

The Governor stated, “Government will seek to introduce amendments to the Commissions of Inquiry Act (CAP. 237), which has been in existence since 29th July, 1880, to bring the Act in line with the Virgin Islands Constitution and Human Rights Act to strengthen good governance.”

All persons in public life will also have an opportunity to declare their interests in the form prescribed through the repealing and replacing of the Register of Interests Act, 2006 (no. 5 of 2006).

The Elections (Amendment) Act, 2019 will also be brought forward to improve the administrative process of voter registration and the accuracy and accessibility of the database of voters.The amendment will consolidate and streamline the application processes of new voter registration, transfer and update voter registration details to reflect the name and occupational changes, capture additional information to help identify voters, and aid in reducing the duplication of records.