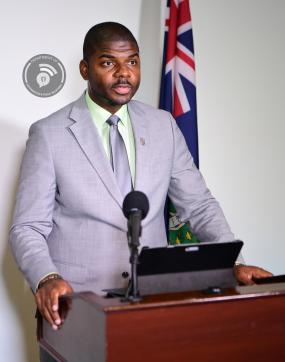 Premier of the Virgin Islands, Dr. the Honourable Natalio D. Wheatley has affirmed that, “Reform itself remains a top priority of his administration”, in a public statement regarding key issues on government reform.

The honourable Premier, via a Facebook LIVE broadcast yesterday, reminded the public that the reform is being done to implement the recommendations laid out by the Commission of Inquiry report, but also towards a better Virgin Islands.

Premier Dr. the Honourable Wheatley said, “Reform is about making necessary changes to see a better future for our people. It is about engendering a new culture in the way we handle the public’s business, and strengthening and improving our institutions and systems of Government.”

Premier Wheatley stated, “We must admit that many of our established practices are not fit for purpose and that we must change them if we want to see better public services, better infrastructure and better economic performance. We must make changes at every level. The Government of National Unity believes change begins with us.”

He also affirmed, “While we carry out reform, the new Cabinet and Junior Ministers will continue working diligently to ensure the operations of Government continue with respect to our schools, hospitals, clinics and other important public services. I want to assure you that we are working in the best interest of the people of the Virgin Islands.”

Premier Wheatley highlighted key areas to undergo immediate reform, including Statutory Board Appointments, Assistance Grants, the introduction of a Register of Interest Act, and General Elections.

The Premier said Cabinet will very soon commission the development of a proper protocol for the appointment and dismissal of statutory board members, to ensure the process is transparent and that the criteria against which persons are selected for statutory boards is appropriate.

He said board vacancies are being advertised for the BVI Ports Authority and BVI Airports Authority as the appointments of the current BVI Tourist Board members will expire shortly. Premier Wheatley said that once the current membership expires, new appointments will be made with “strong representation from across the various sectors of the tourism industry”.

He said that Government has also reached the conclusion that it is in the public interest to have a new Social Security Board.

The Premier announced that assistance grants will soon be administered via a centralised system by the Social Development Department (SDD). The SDD, as the primary vehicle, will receive added capacity and resources to administer the grant programme.

Premier Wheatley asserts that the new approach is “more structured, targeted and actually gets to the root cause of the problems that persons face so that long-term solutions can be found, especially those of a socio-economic nature.”

The transition to the new system has already begun, and is being led by Minister for Health and Social Development, Honourable Marlon Penn, who will be further updating the public in due course.

“We will ensure that those in need, persons with disabilities, our golden gems, and others, will not suffer while the new system is being formulated and implemented,” the Premier said.

Dr. the Honourable Wheatley said a Register of Interests Act will be introduced at the House of Assembly to hold elected officials accountable.

He said among other things, the legislation will make declarations public and it will also include punitive measures for anyone who fails to declare their interests on time or not at all.

The Honourable Premier said Cabinet will be proceeding with election reform to address issues such as campaign financing to “ensure the integrity of the electoral process is as high as humanly possible”.

Premier Wheatley noted that this particular reform is “going further than the COI Report recommendations call for”.

“We have a collective responsibility to strengthen and improve our democracy,” he said.

The National Unity Government, continues to update the public on various key matters relating to the Commission of Inquiry Report and the Recommendations, Government Reform, and the building up of Virgin Islands pride and a renewed spirit of togetherness.