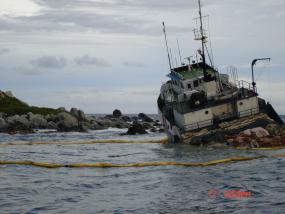 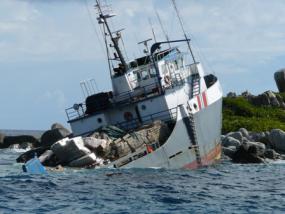 The Government of the Virgin Islands was awarded the sum of $221,935.86 for clean-up costs as a result of an oil spill that occurred in the BVI waters in 2006.

The High Court of Justice granted judgment in favour of the Government in a judgment delivered on June 4 and included compensation for labour and salvage assessment costs as a result of the accident that occurred at sea on October 15, 2006 involving the MV Vagabond, which was owned by Caribbean Transport Ltd.  The claim for compensation was filed in court by the Attorney General’s Chambers in October 2012 seeking full compensation for clean-up costs in the amount of $251,329.76.

The judge found that there was irrefutable evidence that the Government provided services for the clean-up process and had to call on an external US based firm to assist.

Senior Crown Council Giselle Jackman-Lumy and Crown Counsel Sarah Potter-Washington appeared on behalf of the Attorney General. The Defendant was represented by Richard Rowe of the law firm DenJen.

Mrs. Jackman-Lumy said she was satisfied with the outcome of the proceedings and indicated that considerable time and effort was put in to pursuing the matter.

Director of the Department of Disaster Management, Ms. Sharleen DaBreo explained that the accident occurred just before midnight on Sunday, October 25, 2006 while the vessel was en route to Anguilla.  The impact caused significant damage to the vessel, and the captain and crew had to be rescued.

Ms. DaBreo said, “This required a national response under the direction of the Royal Virgin Islands Police Force and subsequently the activation of the National Emergency Operations Centre.  The operations went on for days and involved a number of local and international agencies including those from the United States Government.  The Attorney General’s Chambers worked extremely hard to prepare a solid case for presentation to the High Court judge and they were successful in their delivery.”

The Director said her department has worked with a number of departments and private sector agencies to increase the level of awareness about oil pollution in the waters and on land and to establish the necessary legal framework.

“We have seen the success of the public awareness and education campaigns as the number of spills have decreased significantly.  We continue to inform and educate the public about the effects that can be caused by oil spill on land and at sea.  We offer training to build response capacity among our responders and enforcement agencies,” Ms. DaBreo added.

This is the first matter of this kind that has been taken to the High Court that is said to have now set a precedent for how further claims will be handled.

The judgment is also a significant win for the Government of the BVI and will now lead to greater focus and attention on the finalisation of legislation to support the enforcement of appropriate standards to prevent these types of events from occurring in the future.  The Ministry of Communication and Works has developed a draft Oil Spill Prevention and Pollution Bill that is expected to be finalised and taken to the House of Assembly for approval.

Oil spills are extremely harmful to marine and land-based ecosystems. Persons wishing to dispose of waste oil are asked to take their containers to the incinerator plant located at Pockwood Pond.