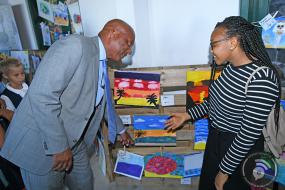 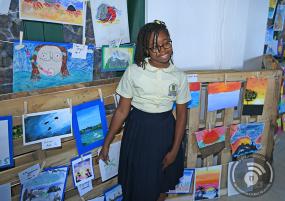 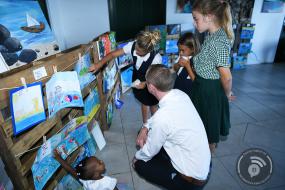 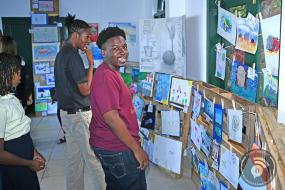 Some 140 pieces of art created by children of school age living in the BVI were showcased at a prize giving ceremony hosted by His Excellency Governor Augustus Jaspert and Mrs. Millie Jaspert.

At the ceremony held last Friday March 15 at Government House in Road Town, Governor Jaspert said he was pleased to see the amount of artwork on display and he also reiterated that the Territory’s  most important natural resource is its people and its  most important people are the children and their future.

Cayley Smit, Policy and Programmes Officer within the Governor’s Office said the aim of the competition was to raise awareness of the environment by reaching as many students as possible. She said submissions were handed in from Jost Van Dyke, Virgin Gorda and Tortola.

Ms. Smit added, “It was a lively event with children enjoying seeing what others had produced and adults marvelling at the wonderful talent displayed.”

She extended her appreciation to everyone involved including the children, teachers, mentors and parents who assisted to make the competition successful.

The organisers of the competition included the Association of Reef Keepers (ARK), Art Without Limits (AWOL) and Island Bags as well as the team at the Governor’s Office.

Ms. Debi Carson of (AWOL) thanked the children for their fantastic effort while Dr. Shannon Gore of (ARK) discussed the need for further environmental education and the need for everyone to learn and help protect the natural resources of the BVI.

Dr. Gore also showcased the ARK Google Expedition VR goggles and demonstrated how the underwater experience facilitates an understanding and love for the ocean.

IslandBags, who provided the original concept for the competition reminded persons present as to how their product will help to keep single use plastics out of the Territory’s landfills.

The organisers said they are in the planning stages for next year’s art calendar with the aim to reach every school and organisation in the territory as well as host enough workshops to support all children to grow their artistic talent.

Some of the favourite pieces in the competition will be auctioned in the near future to  raise funds for further art and environmental education projects.