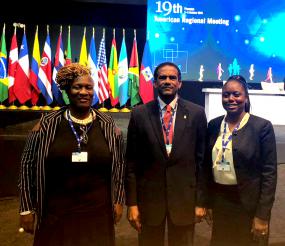 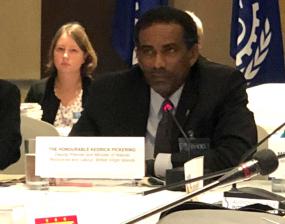 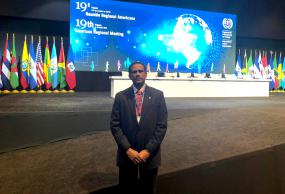 Deputy Premier and Minister for Natural Resources and Labour, Dr. the Honourable Kedrick Pickering recently participated in the High-Level Tripartite Meeting of Selected Key Topics for the Future of Work in the Caribbean which took place in Panama City, Panama.

The one-day meeting which was held on October 1, allowed government workers and employors’ representatives from the Caribbean to have a discussion on implications of the key aspects of the future of work within the specific realities and communities of the Caribbean, particularly from a perspective as small island developing states (SIDS).

The meeting also explored opportunities and opinions from International Labour Organization (ILO) constituents to deliberate on policy issues and practices to advance the decent work agenda in the Caribbean in the context of an evolving world of work.

Honourable Pickering shared with the panel and attendees the effects of hurricanes Irma and Maria and the recovery efforts that the BVI put into effect as it relates to labour needs following these storms.

He said, “Following the disasters, it was quickly realised that all work was decent work, as persons were faced with displacement from their regular jobs due to the destruction of the Tourism industry, namely hotels, yachting and restaurants.”

Other sessions were held during the one-day meeting including ‘Tools for Improving Employability of Youth’ and ‘Productive Development Policies for Job Creation’, and ‘Social Partnership in the Region – How to Sustain the Achievements of the ILO-EU Project’.

On October 2, Minister Pickering also attended the 19th Regional Meeting of the Americas of the International Labour Organization which focused on four thematic plenary sittings. The sittings were geared towards the future of work, and the discussions focused on the following topics:

■ Policies for sustainable, productive development for sustained and inclusive growth, with more and better decent jobs.

■ Policies to promote the transition from the informal to the formal economy and to respond to accelerating technological change and to diverse forms of employment.

■ Measures and policies to strengthen and redesign institutions in the world of work, including social security, and to ensure that trade union and labour rights are fully upheld.

■ The digital economy and labour skills and competences.

A Special high-level sitting hosted by President of the Republic of Panama, His Excellency Mr. Juan Carlos Varela Rodríguez was also held. President Rodriguez spoke on the ‘future of work and work of the future’ as it relates to Panama and his Government’s task to address labour related issues. Minister Pickering was accompanied by the Deputy Labour Commissioner, Mrs. Michelle McLean and Desk Officer for Labour, Ms. Nadia Demming.

The International Labour Organization (ILO) is the United Nations agency for the world of work.  It sets international labour standards, promotes rights at work and encourages decent employment opportunities, the enhancement of social protection and the strengthening of dialogue on work-related issues.