“It Is An Honour To Be With You Today,” Lord Ahmad Visits BVI 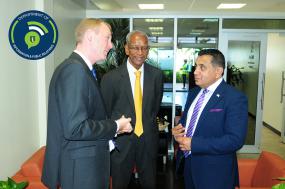 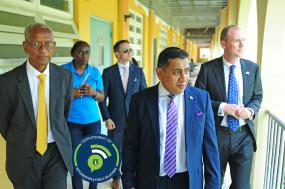 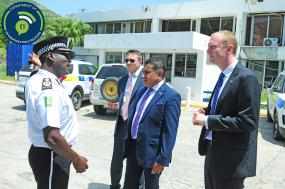 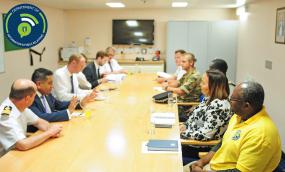 United Kingdom (UK) Foreign Office Minister for the Overseas Territories, Lord Ahmad of Wimbledon, has said that it was a humble honour to be present in the Territory.

Lord Ahmad arrived at the Terrance B. Lettsome International Airport, on July 31 and was greeted by His Excellency the Governor Augustus J. U. Jaspert and Premier and Minister of Finance, Dr. the Honourable D. Orlando Smith, OBE.

Lord Ahmad attended the official hand-over ceremony for the Magistrate’s Court Modular Building, a gift to the Virgin Islands from the United Kingdom Government and presented the keys to the building to Governor Jaspert and Premier Smith. He was also given a tour of the building.

In his remarks at the ceremony, Lord Ahmad spoke of the unity between the Virgin Islands and the UK and the UK’s commitment to help the Territory rebuild stronger. He said, “You will never be alone, you are part of our family; we are proud of that fact and it is an immense pleasure and a humble honour to be with you today.”

Lord Ahmad has met with disaster management and security officials including Director of the Department of Disaster Management, Ms. Sharleen DaBreo and the Acting Police Commissioner, Mr. Alwin James on board the RFA Mounts Bay.

He also visited the East End Long Community Centre, the Elmore Stoutt High School and the Road Town Police Station and met with the Cabinet of the Virgin Islands and the Board of the Recovery and Development Agency.

Lord Ahmad will meet with the Leader of the Opposition Honourable Andrew Fahie, young entrepreneurs, and tourism and business representatives tomorrow.  He departs the Virgin Islands later in the day.