Statement By Premier Honourable Andrew A. Fahie On The Immigration And Labour Reform Initiative

Statement By Premier And Minister Of Finance
Honourable Andrew A. Fahie
On The Immigration And Labour Reform Initiative 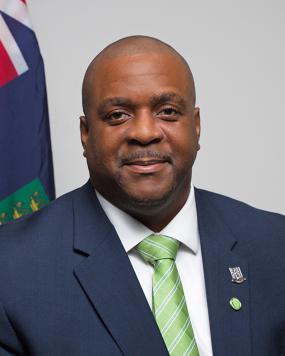 Fellow British Virgin Islanders, I wish to take this opportunity to thank all members of the public who took the time to dialogue and feedback with the government in the consultations on the very important issue of Immigration and Labour reform.

This is a comprehensive process. The first phase focuses on addressing the issue of persons living in the territory for very extended periods.

I am proud of the way our citizens conducted themselves during the public sessions on this issue. It speaks volumes for us as a people that we can maintain our composure and respect for each other while being passionate about an issue such as this.

I want to assure every individual who submitted their views, whether verbally or in writing, that their submissions have been given due consideration during a thorough review of our approach.

On Monday, there will be a sitting of the House of Assembly, and the initiative on the order paper, speaks to the amendment to the Immigration and Passport Act that allows for cabinet to have a say in a process that effectively deals with the backlog.

In spite of what has been suggested elsewhere, the proposed amendment does not speak to the comprehensive Immigration and Labour overhaul, which will come down the road after even further consultations.

Monday sets the framework for a broader policy to come.

This is also a clear result of the recent consultation process.

The consultation process provided a forum for persons to air their concerns and, through which, the government got to understand the fears of residents – both legitimate and otherwise.

We were pleased that we also had the opportunity to correct many misunderstandings.

Not everyone we appreciate is fully satisfied; and in any process of national development, everyone will never be satisfied. But we are pleased that we have adjusted course, and found common ground that is in the best interest of every Virgin Islander.

But it is important that everyone understands the following points as we continue to debate this process:

1.     What we are seeking to address does not involve new people or recent residents. There will be no flooding of our Territory with new entrants. Initially, we had envisaged considering people who were here for 15 years or more. But coming from the consultation, and having listened to you, the people, we have lifted that ceiling for consideration to 20 years.

2.  Not every person who has been living in the BVI for an extended period of time would be eligible for regularisation of status – whether as resident or as a belonger. Only persons who meet the existing criteria and who have been making a contribution back to our society would qualify for consideration.

3.  Qualification for consideration does not equate to immediate regularisation. The existing evaluation processes by the Immigration Department and other government agencies remain in place and will be strictly applied in the evaluation of applicants. The only difference is that the length of processing time is being shortened in this single instance.

4.  This fast-tracking initiative is for one time only. The objective is to mainly address the backlog of applicants that have been pending and to sort through which applications have merit and which do not. With the backlog cleared, there will be no further need for these special provisions.

5.  The clearing of the backlog is the first phase of the government’s strategy for a comprehensive reform of the immigration and labour laws and procedures.

The clearing of the backlog of applicants resident here 20 years or more, makes the coming reform easier.

These reforms cannot be embarked upon with this backlog hanging over the Territory’s head as it can compromise the smooth implementation of the reform programme that will be in the hands of you the people.  Starting from next week, we will begin a series of more public discussions to shape the new immigration and labour policies, and to consider the substantial amendments to the Immigration and Passport Act, in the best interest if every Virgin Islander.

6.  The comprehensive reform programme is aimed at closing the floodgates that currently exist and which have, in some regards, compromised the interests of BVIslanders, leading to the fears that were raised during the consultation process.

While all other previous governments sidestepped this difficult issue, may I say, to the detriment of all BVIslanders; this government has taken the bold step of allowing every Virgin Islander to now shape the new proposed immigration policies and laws.

This first stage of this reform process is not a case of allowing people to over-run us, as some critics have claimed.

The Immigration Department has confirmed that the backlog of applicants residing here for 20 years or more is less than 800 persons. And even so, under our current process, not all will automatically qualify.

We are satisfied that it is being done in an open and transparent way, unlike that has happened in the immediate period before.

In the last seven years under the previous administration, over 2,000 people were given some kind of status – and that was done quietly and silently, and not in the open transparent way that your government is undertaking.

Might I add, that a few of these people who received status was under 20 years residing in the BVI, and without any records of proper vetting. Interesting, a large portion of these approvals came just before the last general elections and were mainly of people who were not part of the backlog.

This is the type of behaviour we must bring to an end.

The Immigration and Labour reforms that the government is pursuing will ensure that persons who come to the Virgin Islands for employment do not develop unfounded expectations and that their presence in the Territory does not remain unchecked.

The labour reform policies will provide greater protection to BVIslanders and Belongers in the job market by closing the gaps that have made it possible for local persons to be locked out of certain jobs.

When the government is finished implementing the reform packages that will be given to us by you, the people, there will be stricter screening procedures for allowing persons into the Territory for work, and also for the renewal of work permits.

In terms of renewal of work permits, we have welcomed the suggestions brought forward at some of the public events, that the employer applying for such, MUST furnish the Labour department with a good standing certificate from NHI, Social Security and Inland Revenue.

The government also intends to cap the number of expatriates that are allowed into the Territory for work.

However, before all of this and more can be done, the issue of the backlog must be resolved, and the sooner these issues are put to rest in a transparent and accountable manner, the sooner the government can move forward with the rest of planning and implementing protections for our people.

Our borders have been left wide opened far too long, and now is the time to move with haste, to begin the process of protecting our borders and all Virgin Islanders.

As a Territory, we can no longer choose to ignore or avoid dealing with the issues affecting our Immigration and Labour policies. Doing so is why we are where we are now.

This is even more urgent given that these issues are now featuring in UK government reports and the international media.

If the BVI does not take the rudder, someone else will make these decisions for us, and we run the risk of ending up in a place that does not favour our interest as Virgin Islanders.

This current challenge is an issue that has been studied, dissected, analysed, researched, and consulted on and recommendations made on policy, law, process, and governance and so on, for many years.  But the issue continues to plague BVI, because we have not addressed the heart of the matter.

Now is the time for all of us to take individual responsibility, get on board the boat “BVI Unity” and cross the vast ocean of our Immigration and Labour issues.

We must do this now before we get too deeply into the current round of migration being dictated by our recovery and economic substance circumstances.

The present situation, with all of the things that we are unhappy about, is the result of procrastination by administrators and policy makers, who choose to sidestep dealing with the issues of Immigration and Labour because they felt that those were controversial topics.

Inaction by your current government is not going to solve these problems. Only action will; action that involves you, the people.

That is why your government has paused to listen to your concerns and solutions, so that we can make sure there is a genuine place for BVIslanders in the BVI.

And, as I have sought to moments ago, once the government is able to execute each step of this plan in the right sequence then our people will be better off than if the issues had remained untouched.

We are determined to bring comprehensive Immigration and Labour reforms that will settle all the issues once and for all.

After this process, we are moving speedily to implement measures to tighten our borders.

As a matter of fact, we have already started because recently in cabinet, we approved the purchase of new border monitoring software for use by our Immigration Department.

This will allow the Immigration Department to keep proper tabs on people entering the territory; and also keep proper records for reference that will be used in cases of requests for work permit renewal.

We intend to make clear to people entering our borders what to expect from before they hit our shores.

There will be stricter measures regarding the renewing of existing work permits.

We are aware of instances of work permits being renewed but their Social Security, National Health Insurance & taxes are not being paid.

We are moving to ensure that this is discontinued, with violators facing heavy penalties.

This is important to enforce, in order to ensure security and to improve government finances.

We are also are aware of potential employers who sponsor people to come here, but with no work to do; which allows them to freelance in our job market.

These people, sometimes end up with three or four jobs, and also resulting in cheating the system further by not paying Social Security, or their due taxes, and even while at the same time benefitting from all the social services.

These are being looked at – and the loopholes will be blocked.

We have to be more accountable; and secure our borders; and bring law and order in this Territory.

As we progress along, more details of the Immigration and Labour reform policies will be revealed and opened up for public discussion, so that citizens can have their input into the shaping of these policies.

As a proud BVIslander, my oath is to work in the best interest of the Territory. Even those who are skeptical, I can watch you boldly in the eyes, and say I am keeping the faith.

There will come a time in history, when people will look back on the path we have taken, and on the bold steps we have made – and say that in spite of fear mongering at the time – the people of the Virgin Islands are better off; and that our children have inherited a more prosperous and sustainable environment as a result.

Through the grace of God, we continue together and we march on.

I thank you very much.