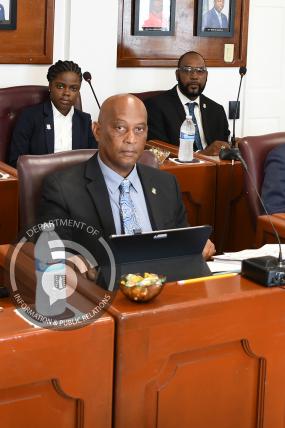 Minister for Natural Resources, Labour and Immigration Honourable Vincent Wheatley has issued a call for community and non-governmental organisations (NGOs) to do their part to fight against the Stony Coral Tissue Loss Disease (SCTLD).

Honourable Vincent Wheatley in a statement during the Ninth Sitting of the Second Session of the Fourth House of Assembly explained that the bacterial disease is affecting stony corals in the Territory’s waters and if left unchecked can result in major impacts to about twenty-two (22) different kinds of corals, which are key structures that give reefs their complexity, provide protection from storms and is home to a variety of fish and invertebrate species.

Honourable Wheatley added that the bacterial disease found its way to the waters of the Virgin Islands from the Florida Reef Tract where it was first observed in 2014 and has spread throughout the Caribbean ever since.

The minister stated that the bacteria has now made its way to popular dive sites including Angel Reef, Ring Dove, the Indians and the Wreck of the Rhone, the only marine park in the Territory. The bacteria is not harmful to humans, but is an added stress factor for corals coupled with climate change, sedimentation loads from land reclamation and ocean acidification, which weakens their defense and makes coral reefs more susceptible to disease.

Treatments for the bacterial disease have shown results on small-scale applications, as much as two percent (2%) daily. A strike team has been proposed after the Environment and Climate Change Unit lost its vessel which was used to do most of the coral reef monitoring prior to the hurricanes of 2017.

The team is comprised of public officers from the Ministry of Natural Resources, Labour and Immigration; the National Parks Trust and the Department of Agriculture and Fisheries to accomplish the task with the aid of NGO’s and volunteers.

Minister Wheatley also mentioned a potential citizen science system that could utilise such methods while NGOs and volunteers are out on their diving excursions.

He said, “The BVI has over 84,000 square kilometers of ocean space and approximately 78,000 acres of reef. This area is critical to our existence but the Government cannot do it alone. It needs to be a team effort where we all must work together in saving our reefs.”

Honorable Wheatley called on everyone to work together to save the ocean, the Territory and ourselves. “We all need to become more responsible about our natural environment as we have an obligation to do it for now and for generations to come,” he said.

The Ministry of Natural Resources, Labour and Immigration continues to effectively manage and administer the natural resources of the Territory in a manner that ensures long term sustainability.

Attached:  Photo 1: File photo of Minister for Natural Resources, Labour and Immigration Honourable Vincent Wheatley at the House of Assembly.