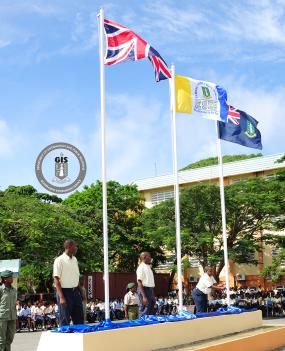 The Elmore Stoutt High School (ESHS) officially launched its own flag and pledge on the school campus earlier today.

The occasion was marked with a brief ceremony with official speakers including Minister for Education and Culture, Honourable Myron V. Walwyn.

Honourable Walwyn stated, “About three years ago when we put the initiative together for flag raising at schools, we deliberately put a third pole because we wanted each of the schools to develop their own flag. What is being done…is an extension of the government’s commitment to building national pride in the Territory and this helps us within the walls of the Elmore Stoutt High School.”

He added that the school is a ‘training ground for life’ and if students can foster pride in their schools, they will grow as adults who also have pride.

A group of students recited the school’s pledge which states: “I pledge allegiance to the flag of the Elmore Stoutt High School and all it represents, to obey the rules of the institution, to respect the cultural diversity of my school, and to serve it with loyalty and pride to achieve peace, progress and prosperity for the Territory”.

Students are expected to hoist the school flag alongside the Union Jack and Territorial flag, and recite the pledge every morning.

The Elmore Stoutt High School, with over 1300 students, has the largest student body in the Territory.

The Ministry of Education and Culture is committed to creating a “Culture of Excellence” in all the Territory’s educational institutions.