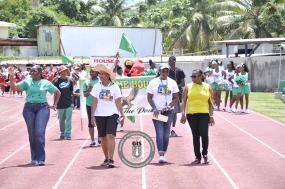 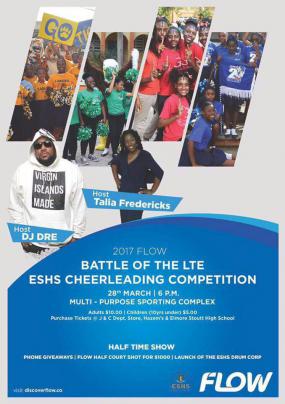 The Elmore Stoutt High School (ESHS) will be hosting the 46th Annual Inter-House Track and Field Championships on March 29 and 30.

Principal, Mrs. Sandy Underhill said the event will commence on Wednesday, March 29 with a march past with athletes and cheerleaders from four of the school’s houses, namely Lettsome, Sonics, Flemming, and Carlisle.

Mrs. Underhill said, “The march past will begin at 11:00 a.m. from the ESHS school grounds and proceed along the Fishlock Road on to the Blackburne Highway and end at the A.O. Shirley Recreational Grounds.  The march past will be followed by an official ceremony at the grounds at 12 noon.”

Lettsome House’s Arianna Hayde was the Victrix Ludorum, while there was a three way tie for the Victor, between, Carlisle’s Akeem Bradshaw and Lettsome House’s duo of Adriano Gumbs and Antwon Robinson.

That event takes place on Tuesday, March 28 at the Multi-Purpose Sports Complex at 6:00 p.m. and will feature a half-time show with phone giveaways, a FLOW half-court shot for $1,000 and the launch of the ESHS Drum Corp.

Tickets are on sale at the Elmore Stoutt High School, J&C Department Store, and Hazem’s at $10.00 for adults and $5.00 for children (ten years and under).

The public is encouraged to attend the events and support their favourite House by wearing House colours.

The Ministry of Education and Culture continues to support Virgin Islands’ athletes and young persons by ensuring that the Territory’s youth excel and create a culture of excellence for themselves, and by extension, the Virgin Islands.