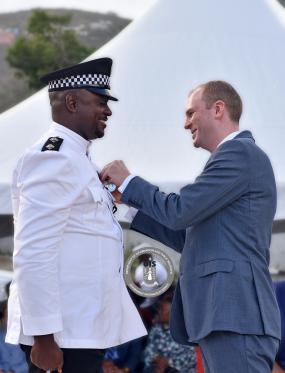 Officers from the Royal Virgin Islands Police Force and Her Majesty’s Prison were recognised and presented with long service medals at the official celebration of the Birthday of Her Majesty the Queen.

His Excellency the Governor Augustus J. U. Jaspert presiding over his first Queen’s Birthday celebrations locally on Saturday, June 9, inspected the parade accompanied by the Parade Commander, Superintendent Jacqueline Vanterpool and the Commissioner of Police, Mr. Michael Matthews.

The following officers received medals for their years of service;.